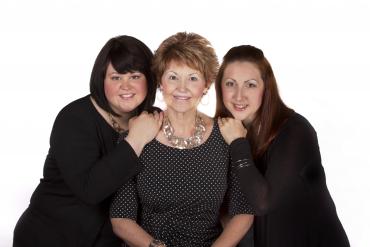 We are the owners of the only west coast franchise in the US and feel blessed to provide this amazing service to the greater Portland, Oregon area. There is nothing quite like it around here. It is a once in a life time chance to capture a moment in time and freeze it forever.

We are a mother-daughter-daughter team. Michelle, married to Steve for over thirty years, has been a stay at home mom and is the mother to three grown children. She and Steve are now raising another gift, Colton age thirteen, on their second trip down parenthood lane. She is a proud “Mimi” to her three granddaughters and three grandsons.

Missy, married to Drew, is Michelle’s oldest daughter and she has a eight year old daughter, Grace Noel, who keeps her on her toes.

Heather, married to Brandon (Michelle’s middle child) has a five year old daughter, Hadlie Mae, who has blessed their lives beyond words and a handsome little man, Bransyn “Fergie” who just turned one.

We are all three best friends and are excited to begin this new adventure together.

We first found out about Mometoes when a friend had her twins cast just a month before Missy had Gracie in 2008. We knew that this was something that we had to get done, and just seven days after Gracie was born, we had her feet cast. Along came Hadlie, in the fall of 2010 and we returned to have her tiny feet cast as well. It was then that we became aware of a franchise opportunity. We jumped on it and things fell into place as if they were meant to be.

We believe in Momentoes and the success that is in its future as more and more people find out about this amazing product. We advertise regularly at Babies ‘R Us and have enjoyed watching people’s reactions as they see this amazing keepsake for the first time.

We look forward to meeting with you and helping you to create this lasting keepsake.